This version of Puff Pastry sopapilla cheesecake is made with perfectly crisp and flaky Puff Pastry dough for the crust. With a cream cheese filling and cinnamon crunch topping, these cheesecake bars are quick, easy and delicious!

Today I have a wonderful recipe for Puff Pastry Sopapilla Cheesecake just in time for Easter or Mother’s Day. It’s so simple to make, but your family will love the combination of flaky pastry, cream cheese filling and cinnamon crunch topping!

Traditional Mexican sopapillas are little dough fritters that are coated in cinnamon-sugar after frying. I’m not sure who first thought of using that flaky dough as a cheesecake crust, but I’m thankful they did because sopapilla cheesecake is amazing!

To make it even more tasty and convenient, use Pepperidge Farm® Puff Pastry Sheets for the crust, which you can find in the freezer aisle of your local grocery store. You’ll need to thaw the Puff Pastry first, which can take up to 40 minutes at room temperature.

The dough should unfold easily but still be cold. If it doesn’t unfold, microwave for an additional 5 seconds per side. Repeat the process with the other sheet of Puff Pastry.

Lay one sheet of Puff Pastry in the bottom of a 13×9 pan. Poke all over with a fork so it doesn’t puff up too much and then bake for 15 minutes. Remove from oven and let it rest for 5 minutes to cool and deflate.

Next, spread the cheesecake filling over the par-baked crust. Top with the second Puff Pastry Sheet and tuck in the ends to completely cover the top. Pour melted butter over the top, then sprinkle with lots of cinnamon-sugar.

My husband loves these bars after they’ve been refrigerated. The best part is that the crust still stays crisp after chilling! Be sure to visit the Puff Pastry website for more recipes #InspiredByPuff!

Pin this to your dessert board!

Did you make this recipe?

Sign up and receive a free cookbook!
Features exclusive, never before published recipes!

Plus, tasty recipes delivered to your inbox each week!

Hello! When I’m not baking sweet treats and flavorful meals, you’ll find me at the beach with a good book! {Read More…} 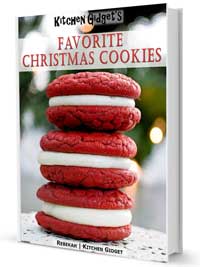 No spam, just tasty recipes delivered to your inbox!

Kitchen Gidget is a participant in the Amazon Services LLC Associates Program, an affiliate advertising program designed to provide a means for sites to earn advertising fees by advertising and linking to amazon.com